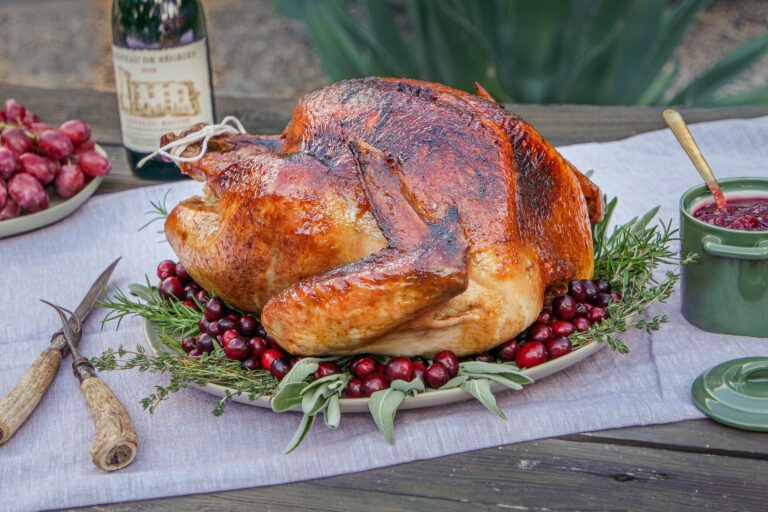 To baste is a term used in the kitchen, and it’s a skill that is applied when cooking especially meat. To baste is the act of pouring juices on the flesh to keep it moist while still cooking the meat.

A turkey is a type of bird that is edible to humans. Moreover, it is found mainly in the northern part of America. When slaughtered, its body looks exactly like that of a chicken, but it’s big and powerful.

We have four types of turkeys:

Among all the four types of turkey, only is best known to be nutritious and healthy for human consumption, which is the broad-breasted white turkey.

Below is an image of the turkey.

See how beautiful it looks when it opens up its wings.

The bird is powerful, and when it comes to butchering it, you need much more preparation than that of a chicken. It is on-demand due to its lean meat.

This bird is used in America during the Thanksgiving celebrations. Families shop for this bird meat and prepare a delicious meal as they merry together at the dinner table.

These birds feed on insects, seeds, worms, and also plants. They keep themselves clean by dustbathing on the sand.

Turkey meat is rich in proteins which helps in muscle growth.

It has low saturated fat. That is why it’s best to consume it because no fat will accumulate in your body.

Turkey meat has an anti-cancer component. Selenium is a component found in turkey meat that reduces the risk of cancer in the body.

Turkey has tryptophan which improves the moods of the human body. It triggers the hormones that control the feelings/attitudes in your system.

These benefits are health benefits, and it encourages you to eat turkey meat often.

To embark on basting a turkey,

This mixture you will use on the turkey.

The turkey meat usually dries up quickly, so you need to keep it very moist around for it not to dry up as it is cooking.

At this point is where you do the basting process.

How to baste a turkey?

Earlier on, we had seen that the term basting is the process of keeping the meat moist as it cooks.

Turkey meat dries up quickly when cooking, so to baste it is a suitable method of keeping it moist.

You need to remove the turkey from the oven and place it on the kitchen top.

You will find that on the baking tray, some juices have dripped.

That is your results.

Turkey meat has its side effect when consumed in excess.

As you enjoy turkey meat, consume it in moderation.

link to How To Heat Corn Tortillas

What comes to your mind when we say tostadas, quesadillas, tacos, and enchiladas? Yes, you are on the right track. All these mouth-watering dishes are a result of tortillas. What a wonderful thing it...

Continue Reading
link to How To Make Cheddar Cheese

A Cheddar Cheese Recipe Who does not love cheddar cheese? And it is pretty easy to get your hands on it-- go to the supermarket, and their numerous varieties available. However, some of you will...

Hi! My name is Jillian Noon and I am the founder of CookingAtNoon.com! I love to spend time with my family, travel, cook & of course eat. On this blog you will find tons of my favorite recipes, tutorials & cooking guides! It’s my mission to bring you the BEST recipes your whole family will love. I hope you find it informative and looking forward to interacting with you (what you liked & what you didn't like) on social media!